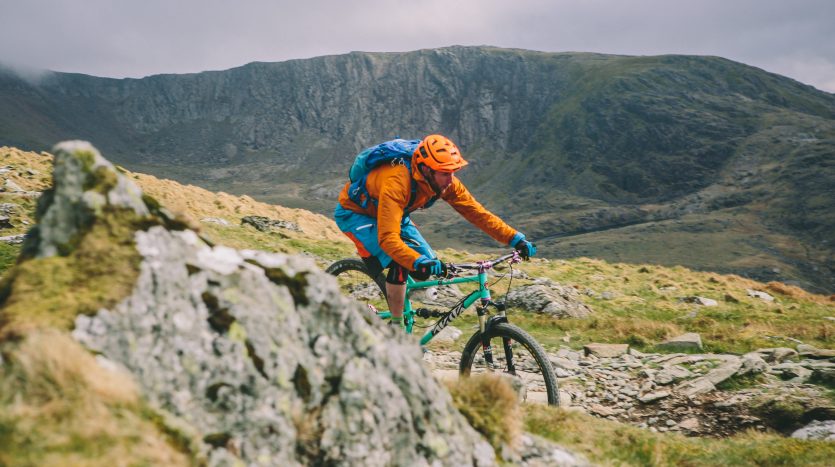 Get to the summit of Yr Wyddfa (a.k.a Snowdon) along this 11.5 mile  / 18.5 km route. There are multiple options to ascend but we recommend the ‘Llanberis path’ and descending via the Snowdon Ranger path and on to Maesgwm (also known as Telegraph Valley) before descending back down in to Llanberis village. Expect a long ascent (4.5 miles / 7.3km) with loose, rocky terrain and rock steps, be prepared to carry your bike at some points along the path. The descent from the summit down the Snowdon Ranger path starts out steep and rocky,  and the surface becomes loose and rocky after you cross the train track.  You’ll then descend along a narrow, rocky section of path which zig zags down the rocky hillside. Once you’ve descended this section,  the path levels out, taking you past ‘Llyn Ffynnon y Gwas’ lake on your left and the skirting you around the grassy mound of ‘Moel Cynghorion’ to your right. Keep your eye out for turn off you’ll need to take – a  path branching off to the right, this bridleway will take you up through ‘Bwlch Maesgwm’ (also known as Telegraph valley). This scenic bridleway route between the hills then links up with a track, followed by a minor public road which takes you back down to Llanberis village.

The biggest cause of mountain rescue incidents on Snowdon is people getting lost, so make sure you bring a map. We recommend the Snowdon OS explorer (OL17).

Carry plenty of food and drink. Remember that ‘Hafod Eryri’ – the summit visitor centre and the Snowdon Mountain Railway is closed during the winter (and early spring) and may be closed at other times of year due to snow or high winds.  It’s vital to carry a torch, map, compass, whistle, first aid kit and mobile phone, but remember – you’re not guaranteed a signal on the mountain so don’t rely on your phone if you get into difficulty.

In wintry conditions you’ll need to take extra clothing, such as a thermal base layer, fleece jacket, gloves and a hat. Often in winter the mountain can only be climbed using an ice-axe and crampons.

Check the Met Office Snowdonia mountain area forecast before setting out . In the winter and spring time this will also tell you if there’s snow on the mountain.

There is a longstanding agreement between the Snowdonia National Park Authority and the mountain biking community over access to Snowdon and its bridleways. The Voluntary Cycle Agreement covers all the bridleways leading to the summit of Snowdon (Llanberis path, Snowdon Ranger Path and Rhyd Ddu path). Cyclists are asked not to cycle to or from the summit of Snowdon between the hours of 10am & 5pm from the 1st of May to the 30th of September. From October to the end of April cyclist have full access to these bridleways. The Maesgwm (also know as Telegraph Valley) route connecting the Snowdon Ranger path with Llanberis village is unaffected by the agreement.

The high level of use of the bridleways to the summit of Snowdon for off-road cycling had led to some serious concerns. Exceptionally high numbers of walkers use the Llanberis, Rhyd Ddu and Snowdon Ranger paths, particularly during the summer months, and because the Law (Section 30, Countryside Act 1968) requires that cyclists must give way to pedestrians at all times, this combination can make for an unenjoyable ride for mountain bikers. The Voluntary Cycle Agreement negotiated between the cycling organisations, the Sports Council for Wales, Gwynedd County Council and Snowdonia National Park Authority acts as a remedy to the problem. 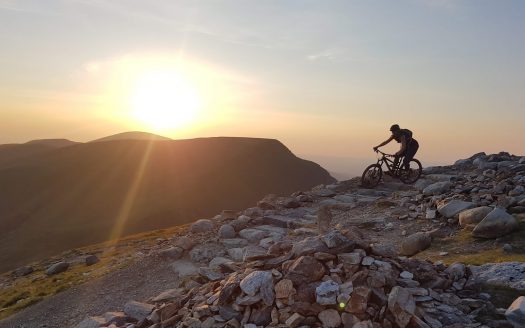